Goshawk in the Gloaming

Back when I was a postman, I found myself with a lovely rural route on the outskirts of Shrewsbury. Spending the day negotiating the knot of quiet Shropshire lanes was a great way to enjoy the ever changing moods of the landscape. There was a section where I’d chase a sparrowhawk down the lane, watching it skim inches off the tarmac before it darted up and over the hedge. I think it was using me to scare the small birds out of their hiding. Our meeting was a regular affair for a while. But I never saw the sparrowhawk catch anything, and so our partnership ended as abruptly as it had begun.

One particularly long and arduous day, I decided to pull the postal van into a quiet lay-by for a break. I sat there for a bit, with the windows wound down, listening to the skylarks and watching swallows skim a wheat field in the sunshine. The candyfloss clouds floated gently by steadily changing into shapes that stimulated the imagination. Then, further down the lane I caught sight of a man walking towards me with his left arm horizontal at the shoulder and bent ninety degrees at the elbow. I initially thought he’d had a horrible accident with it, but as he drew closer, I could see there was a bird perched on his forearm. He looked the authentic country boy with tweed flat cap, long wild hair, and clothes as weathered as the surrounding landscape. A couple of retrievers pointed their noses in various directions around his feet.

‘Is that a buzzard?’ I called out the window as he passed.

‘Wow! I’ve never seen one before. I mean, I read about them and since then I’ve really wanted to see one’

‘Well, here you go’ He said, waving his arm towards me. The goshawk perched there, darting its eyes from one view point to the next. You could look at it for as long as you like and not see an expression to relate to.

‘I’m living off the land with it. I eat what it catches.’

‘You must be going hungry then?’ I put cheekily.

‘No. She always catches something. I’ll have a meal before the walks over.’

‘Aye. As it happens, I’m writing a book about it’

‘Right-oh. I’ll keep you posted’ he added and we chuckled at that as it was me supposed to be the postman. ‘Speaking of which, you got anything for me? I live in the cottage at the end of the stony lane; the name’s Ben’

After checking, I said I hadn’t.

I was finishing my sandwich, not ten minutes later, when I heard a fierce screech. In a field opposite me I saw a pheasant flap noisily past a gap in the hedge, followed by the goshawk, then the retrievers, then Ben, shouting after the dogs. He got his meal faster than I could finish eating mine!

Despite tramping hundreds of miles of country lanes, it would be three years before I’d see another goshawk. That’s how rare an event it is. Unless you go out specifically to find one, seeing a goshawk is a rare privilege. On this occasion, I was doing my regular country lane loop in the gloaming of evening, when I caught a buzzard. Except, I was fooled again, because this bird flew above me, straight as an arrow, and I saw its profile perfectly. The straight tale, the crooked wings, there was no mistaking a goshawk at this angle. It had the courtesy to land on a branch on the outskirts of a forest above the road so I excitedly reached for my binoculars. It gave me time to confirm a positive identification, before it flew into the darkness of the trees. There followed a sudden clapping of pigeon wings and snapping twigs. At least, I thought it was twigs. 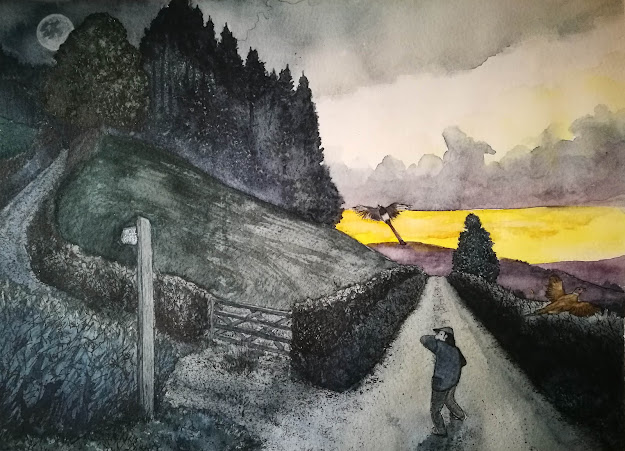 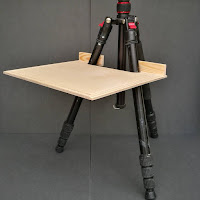